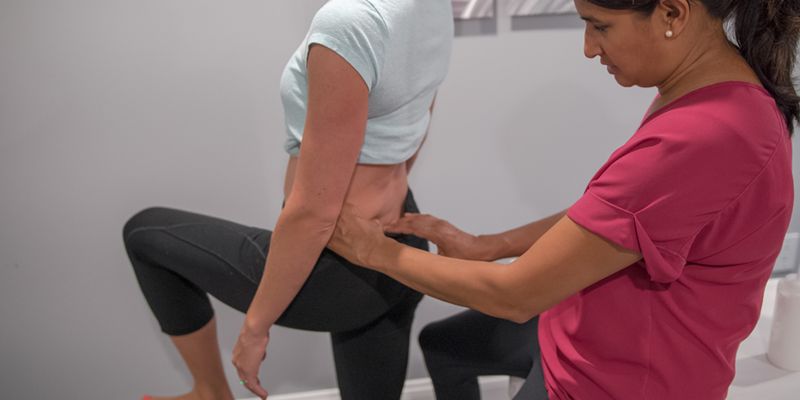 Rectal pain and/or chronic constipation are common symptoms and may be caused the following:

Levator ani syndrome: Episodic or chronic pain, pressure, burning or discomfort in the area of the rectum, sacrum, coccyx regions. The pain can especially increase with sitting or prolonged pressure. The pain is caused by spasming of the sphincter and pelvic floor (levator ani) muscles.

Coccygodynia (Coccydynia): Tailbone pain that can feel dull and achy but typically becomes sharp during certain activities, such as sitting, rising from a seated to a standing position or prolonged standing. Moving the bowels and sex also might become painful. The cause can be from trauma (falls and childbirth), abnormal movement of the tailbone (too much or too little), or overactive pelvic floor muscles which attach to the tailbone

Anismus (dyssynergic defecation): Common cause of chronic constipation caused by muscles tightening when they should be relaxing

Symptoms of the above conditions can include rectal burning and stabbing pain. They can vary from a dull to severe ache. Severe constipation can result from overly tightened pelvic floor muscles. Constipation could also be caused by uncoordinated muscles that don’t release appropriately during a bowel movement. This muscular pain and tightness can be so severe that an individual may admit themselves the emergency room. Unfortunately, patients are often sent home with pain medications and told to follow-up with their physician. Their physician, however, may or may not have heard of pelvic floor dysfunction and have little insight into the origin of the pain / constipation. This is when a physical therapist specializing in pelvic pain can help.

Physical Therapy treatment for anal/rectal pain includes treatment of muscles and joints which may be causing the pelvic floor muscles to spasm and become overactive. Therapists release soft tissue tightness in pelvis region to reduce muscular pain and spasm. Other treatments may include biofeedback instruction to teach patients how to effectively use their muscles, reduce straining and improve relaxation of pelvic floor muscles for proper bowel movements.

Hydrate Into the New Year